Regarded by many music-lovers as one of the world’s most beautiful concert halls, Severance Hall opened in 1931 as the home of The Cleveland Orchestra. The building is named for John L. Severance and his wife, Elisabeth, who initially pledged $1 million for its construction. Elisabeth died unexpectedly early in the design process, and John Severance made additional contributions toward the building in her memory. The building’s architectural significance has been recognized by local and national preservation societies, including the Cleveland Landmarks Commission and the National Register of Historic Places, and Severance Hall is a recipient of the Honor Award by the National Trust for Historic Preservation.

A $36-million restoration and expansion of Severance Hall was completed in January 2000. The two-year Renovation Project was undertaken to restore the hall’s original detailing, expand its patron amenities and services, retain and enhance its legendary acoustics, and to update its performance and support spaces to once again provide a state-of-the-art home for the Orchestra. The highest goal of the project, designed by David M. Schwarz Architectural Services of Washington D.C., was the preservation of Severance Hall’s acclaimed beauty and architectural integrity.

Severance Hall serves as the home of The Cleveland Orchestra for concerts, rehearsals, and administration. The building is also rented by a variety of local organizations and private citizens for performances, meetings, and gala events.

The orchestra was founded in 1918 by Adella Prentiss Hughes, with Nikolai Sokoloff as its principal conductor. From early in its existence, it toured throughout the eastern United States, made radio broadcasts, and recorded many albums. Subsequent principal conductors, with the title of Music Director, were Artur Rodziński (1933–1943), Erich Leinsdorf (1943–1944), and George Szell (1946–1970).

From 1964 to 1965, James Levine served as an apprentice to Szell with the Cleveland Orchestra, and then served as its assistant conductor until 1970.

Szell’s long reign as Music Director has been largely credited for the orchestra’s rise to eminence. He reformed the orchestra in the late-1940s, firing a dozen musicians in the process with a dozen more leaving of their own volition. Szell is also credited with giving the orchestra its distinct, European sound. He pushed an ambitious recording schedule with the orchestra, bringing its music to millions worldwide. Szell’s influence has continued, even decades after his death.

Cleveland is the smallest city amongst the traditional “Big Five” orchestras; the others are based in Boston, New York, Philadelphia, and Chicago. However, musicians in Cleveland are often treated as local celebrities, and, much like sports heroes elsewhere, fans seek autographs after performances and greet musicians on the street. Clevelanders are proud that their city boasts an orchestra that has several times been touted as America’s finest, and compared favorably to many of the great orchestras in Central Europe. In the 1960s fans were known to “have airport rallies when the orchestra comes home from tour [and] chant, ‘We’re the best! We’re the best!’ and carry placards reading ‘Bravo!'” 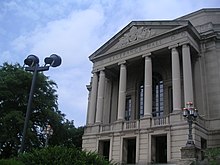 Severance Hall, the orchestra’s home since 1931.

Severance Hall is the Cleveland Orchestra’s home. It was built for the orchestra in 1931. The orchestra performs the majority of its concerts at Severance and also uses the hall for rehearsals and to house their administrative offices. The concert organ there is by Ernest M. Skinner IV-94.

The orchestra also has long-term performing relationships in Lucerne, Vienna, New York City, a residency in Miami, and has conducted multi-concert tours on the West Coast off and on since the 1960s